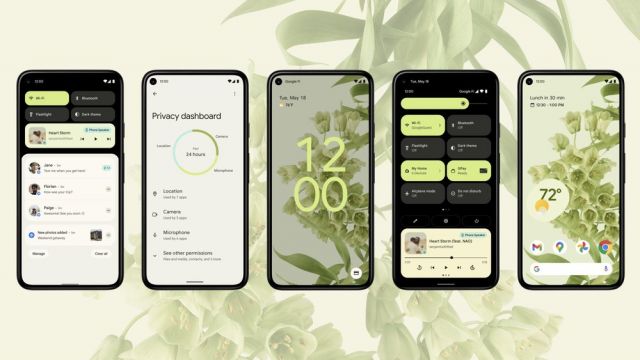 Android 12 was probably the biggest announcement from Google I/O, or at least for our purposes. Offering better personalization, Android 12 builds on the notion of Material You — more on that in a moment — as well as other UI updates which are now viewable on the public beta. And in keeping with one of the major themes of I/O this year, privacy and security, something that Google's ad model seems to be in opposition to, is also top of mind in this version including indicators for when your camera and microphone are being accessed (sound familiar?).

Material You, the next iteration of Material Design, was probably the second biggest announcement. Even more so given the amount of effort it takes to roll out an update for a design system (speaking from experience here). Aside from focusing on personalization and expression through color palettes, adaptiveness across devices and accessibility are also core themes for Material You. And if you own a Pixel, you should be among the first to experience it for yourself.

Google-adjacent, Samsung is apparently working on yet another foldable screen (seriously, I want one). This iteration, a double-folding OLED panel, is reminiscent of a what we would call a "z-fold" brochure from the print days. Although I have my doubts around what the device experience would be like complete folded up — like sticking a club sandwich into your pocket — I am happy that Samsung is stepping up to fill in the experimental device space that LG has left open by closing their mobile department.

Not to be outdone, Apple also announced some accessibility updates rolling out to iPhone, iPad, and Apple Watch as well as other apps and services. In particular, I am super intrigued by the additional gestures included in AssistiveTouch for Apple Watch and the implications they bring. It would be interesting to see how these features could help elevate interaction design in general.

And speaking of Apple, if you have ever needed a desktop reference of the various devices still floating around in the world today, then this is the app for you.