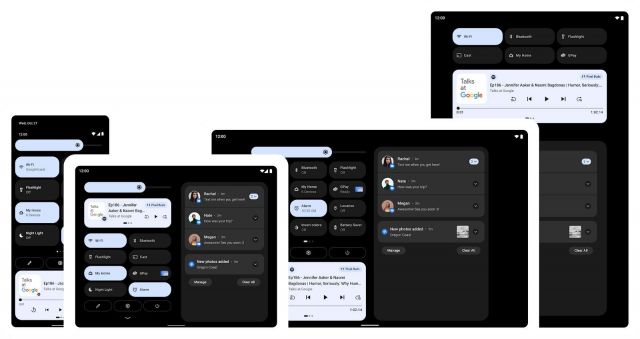 Material Design 3. With the rollout of Android 12, we get Material You aka Material Design 3. A new docs site was launched outlining what's new, getting your app ready, as well as tutorials and tools. From dynamic color to guidelines for foldable devices, there's plenty to be excited about (and hopefully you share my enthusiasm)!

Android 12L. Also announced was the official support for large screens and foldables in Android 12. Not only will Android make it easier for developers to build for large screens, the Material Design guidelines have also been updated to make it easier to design for them as well. This is a much needed step in the right direction (I'll get more into why down below).

Android Widgets. Another recognizable feature of Android 12 are the updated widgets. Leaning into the personalization that Material You provides, widgets are now more customizable in terms of sizing and display options. I've already played around with these a bit on my Pixel 4a and they are admittedly a delight to play with (I only wish there were MOAR!).

Apple Design. In a short thread on Twitter, big updates to the Apple Design Resources were announced. If you've spent much time working with the HIG, you know that Apple tends to rollout its resource updates quietly (I tend to stumble across them as Library updates in Sketch or when looking for documentation that has changed or moved). It's nice that Mike Stern took the time to tweet about it, but it would have been better if they would have used a more official channel.

SharePlay… is now available in iOS 15.1, iPadOS 15.1, and tvOS 15.1. This is the feature that allows you to enjoy content from TV, Music, and Fitness+ with a friend via FaceTime. Not sure how real a problem it solves, but hopefully it's better than screen sharing a movie over Zoom like some of us did during quarantine.

This week, I really wanted to dig in further on the Android 12L business. As one of the common complaints for Android tablets has been the lack of a apps (with maybe the exception of the Amazon Fire), I truly hope this gives devs the support they need for building more tablet apps. I realize that this is a bit of a chicken and egg scenario, but I'm optimistic that better apps will attract more tablet users on Android (I'm thinking product diversity here).

Taking a moment to gloat a bit, I'll point out that I hypothesized about foldables helping to lift tablet apps in a previous issue. After all, Samsung's earnings have ticked up since the release of the Fold and Flip 3. Little did I know, I had also happened upon the new supporting documentation ahead of their official announcement at ADS '21. But more importantly, it's good to see Google throwing their support behind tablets and foldables instead of leaving it all up to the OEMs to sort out.

In the next few issues, we'll pick through the guidance that Android 12L and Material Design offer (which, from my experience working on both phone and tablet apps, I can say is solid). In the meantime, check out this playlist on building for large screens (especially the video on input methods).