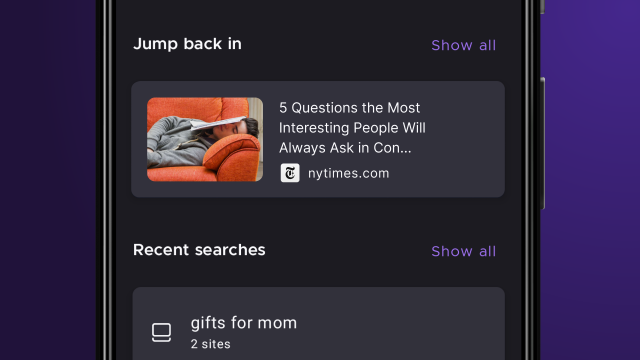 Firefox Mobile. Mozilla released the homepage redesign for Firefox mobile. Based on user feedback, the update focuses on simplifying the on-the-go experience by surfacing your last open tab, recently saved bookmarks, and recent searches. To be honest, I don't use Firefox on neither my iPhone nor my Pixel, but maybe I'll give it a try and see if it works as advertised (downloading it now, actually).

Walm-AR-t. Ahead of the holiday season, Walmart is rolling out an AR shopping campaign. Through a collaboration with Facebook and Pinterest, the retail giant is hoping to reach shoppers through livestreams and shoppable content. I'm not a fan of Facebook and I've been disappointed with the evolution of Pinterest, but it has been interesting to watch Walmart push ahead with cutting edge technology the past few years.

Pinterest TV. And speaking of Pinterest and live shopping, enter Pinterest TV. As it pivots away from being an app for visual inspiration, the new feature is an investment in the creator content angle (similar to other social platforms like Instagram and YouTube). This article offers a fair critique of the app and the woes that are troubling its evolution. Personally, it was the staleness of shared content and invasion of ads that drove me away.

SafeDash. DoorDash roles out a new in-app security toolkit for delivery providers. Through a partnership with ADT, the user can connect with an ADT agent when they feel unsafe or, in worse scenarios, have the agent call 911 directly. It's good that these gig economy companies are starting to think more about the safety of their works, it's just a shame it wasn't thought about sooner.

Apple 911. And on the topic of safety, iPhones could be getting crash detection as soon as next year. In the event of a car accident, the phone would automatically dial 911 for you — particularly helpful if you've been in some way immobilized. If this sounds familiar, it's because Google announced a similar feature for their Pixel phones earlier this year. So, yes, Android did indeed do this one first.

Last week, I mentioned that we'd dive a little deeper into the Android 12L recommendations for large screen devices. I also mentioned that I had happened upon the updated documentation ahead of their official announcement in ADS '21. Well, technically that's not correct. There was this little thing called Google I/O that happened back in May that I had kinda forgotten about. The updated docs were originally announced during the Android and Material Design sessions. And because the accuracy of what I write is important to me, I had to call myself out. My bad!

Back to the recommendations for large screens. You could summarize the guidelines with a few simple questions:

Another way to think about this is context, navigation, and screens. And your app doesn't have to be on Android in order for these to apply — we can glean general best practices for taking an app from phone to larger screens by looking past the Android-specific details that are covered in these sessions.

I'd be remiss if I didn't also point out that, when Android says "large screens," they're referring to anything larger than a phone (with smart TVs in play, I wanted to clarify). Google is intentionally being mobile first with their approach which, from a product evolution standpoint, makes the most sense for Android (i.e., it started as a platform for touchscreen phones; tablets, etc came later). Next issue I'll get more into the details of the how, but I felt it was important to take a step back and think about the why.