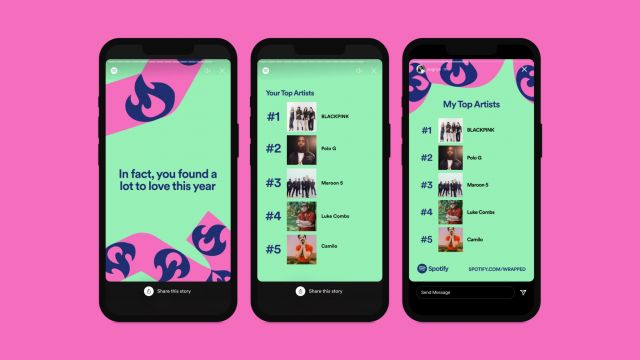 Spotify Wrapped… rolled out last week with the year-end review of your listening habits. If you don't use Spotify, Wrapped highlights your top artists, songs, and genres packaged up in a fun interactive experience (this year's is movie themed). This is only my second year since they rolled out this feature after about a 5-year hiatus from Spotify, but I'd say mine was pretty spot-on (I know, I'm sorry that was bad).

App Store Awards… were also announced last week spotlighting the 15 best apps and games of 2021. Not surprisingly after nearly two years of social distancing, the Trend of the Year was "connection." I can say that, being the father of a teen and a tween, I'm definitely not surprised to see Toca Boca and Among Us! on the list. Pandemic life would have been much more traumatic without being able to at least connect over apps and games.

Google Play's Best… of 2021 winners were announced as well, representing what's next in app and game development. This year's awards were expanded to apps and games on tablets, Wear OS, and Google TV which speaks to the cross-channel focus that Google currently has. In contrast to App Store, the theme for Google Play seems to be "introspection," with Balance: Meditation & Sleep winning App of the Year. And it's worth pointing out that Canva's tablet app won on both platforms.

Android Car Keys. Along with several other features, digital car keys began rolling out on Android 12. Of course, this feature is currently only available for Pixel 6, Pixel Pro, and Samsung Galaxy S21 AND only for compatible BMWs. If any of this applies to you, you'll now be able to lock, unlock, and start your vehicle with a tap of your phone. Understandably, there are a lot of moving parts to get this to work on not only the software side, by the OEM side for vehicles and phone-makers alike. I do not envy their product team!

Mobile + AR. As people spend more time on mobile, brands are looking to connect through AR. Obviously there is more of a marketing lean here, but a 12% conversion for AR content versus the 3.5% conversion for photo and video is pretty impressive. And with mobile making up 63% of online visits and 45% of sales, this speaks volume about the health of mobile and the future of AR. Again, follow the money!

Wrapping up our deep dive on Android 12L, we've covered the importance of context and how to optimize the navigation and layouts for larger screens. In this final segment, we'll get into an area that's often overlooked — input support.

User interaction is an important part of every app and input matters for all users. This means, as you bring your phone app over to larger screens, you should be considering not only touch and keyboard, but mouse and stylus input as well. For each kind of input method, you could put the functionality into two buckets: standard (e.g., click, long-press, typing, scroll, etc.) and enhanced (e.g., gestures, shortcuts, right-click, pressure, etc.). Ultimately, having an understanding of your users' expectations should define what level of input support is appropriate for your app.


P.S. This thread by Jeff Verkoeyen about the use of non-standard UI and IxD in iOS apps is everything!