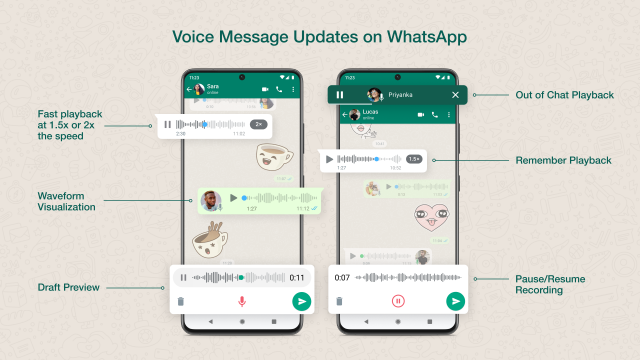 Self-Spam. Verizon customers received mysterious texts… from their own number. And as one my suspect, it looks like it was a concerted effort targeting one of the largest carriers in the US. I was one of those customers and, as a mobile tech professional, I feel obligated to share. Spam callers have been spoofing local numbers for years now, so, sure, why not SMS? See also: email. Le sigh.

iOS Auto-Updates. Craig Federighi explains why your iOS auto-updates arrive late. Apple’s SVP of Engineering reveals that they intentionally stagger rollouts to pro-active users who intentionally seek updates in order to gather feedback. So, no, you didn’t imagine the lag. My wife & I have an ongoing competition about who can get the next iOS version first… and she usually wins. Guess which team I’m on? Yep, Team Auto-Update.

WhatsApp Voice. The voice message system in WhatsApp is getting a much-needed overhaul. The update includes, among other features, out of chat playback and adjustable playback speeds. If this elicits a mere shoulder shrug from you, then it is worth pointing out that in many countries outside the US, WhatsApp is the go-to messaging platform regardless of OS. My wife and our family in Perú communicate almost exclusively through audio messages.

OnePlus Event. The OnePlus 10 Pro 5G launch event happened this week. Positioned as a viable S22 Plus or Pixel 6 Pro alternative, the most notable feature of the 10 Pro is the camera that was co-developed with Hasselblad. Boasting burdenless design, the new flagship will come loaded with OxygenOS 12 to provide a “fast & smooth” experience. And, yes, it will be available in the US — at least one major carrier already offers OnePlus phones for purchase and service connection. You can watch the replay here.

Motorola… has risen to the #3 slot amongst smartphone OEMs in the US. According to recent sales data, the handset company has benefitted greatly from the demise of LG’s mobile division with a 131% growth YoY. Motorola always wins nostalgia points for me personally since I was fairly brand-loyal back in the feature phone (and beeper) days. They’ve been on my radar in recent years due to the resurrected Razr and their supposed near-stock approach to Android.

This week, I was going to run an expanded edition of the Apps Roundup, but then I came across this piece from Bloomberg’s Mark Gurman and wanted to discuss. In it, he posits that Apple should bring some of its more popular services to Android. It’s an interesting idea to ponder that raises all sorts of fun questions. The first one that comes to my mind is what would Apple apps look like on Android? And what about the competitive advantage of the “walled garden”?

We can look at Apple Music for a clue to how Apple on Android might work in terms of the experience. The information architecture, the interaction design, the look & feel… those sorts of things. It’s always interesting to study the design decisions of the companies that also designed the platforms, especially when they have to address competing platforms. But what about the actual services?

I agree with Gurman that Apple stands more to gain by broadening its target market to Android users. There will still be plenty of features to keep us embedded in our ecosystems of choice. Besides, it’s not like swapping out OEMs is exactly easy. But if we look at the interoperability efforts being made on the smart home front, it feels like that’s the direction that technology — and its users — wants to go.