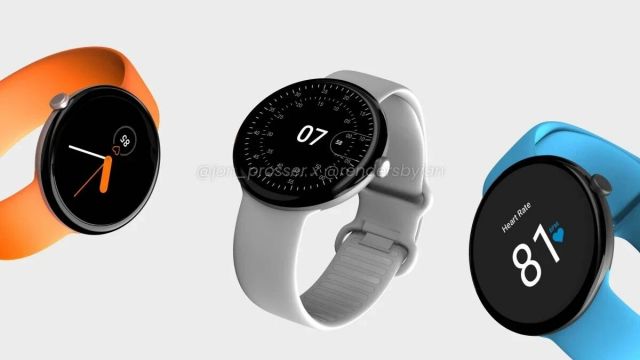 Pixel Watch. Leaked renders hint at possible Fitbit integration. With Google I/O just a couple of weeks away, hopes are high for the official announcement of the long awaited Wear OS device. The leaked renders suggest that the Pixel Watch could launch with support for Fitbit — now also owned by Google — although the depth of integration remains unclear. Much like with Android & Pixel phones, the watch’s arrival will mean we should also expect a “pure” version of Wear OS unhindered by an OEM skin (I’m looking at you, Samsung!).

Material Symbols… are the newest icons to be added to the Google Fonts service. As a discerning mobile enthusiast, you may recognize the 2,500+ glyphs from the Material Icons library (in fact, the updated link from the MD2 docs now takes you to their new Google Fonts page). Using variable font technology, the symbols are available in three styles: outlined, rounded, and sharp. It’s not often that I get share stuff this far down in the weeds, so enjoy (shout out to my design nerds, you know who you are)!

Huawei Foldable. The Mate XS 2 is set to launch this week on April 28. I know, I know… this is yet another foldable that won’t make it to the US market. So why bother mentioning it? Because of the out-folding screen that’s it’s purported to launch with — a break from the folio-style form factor. And since we’re still early enough into the trend when OEMs have a tendency to influence each other — which I’m all for!

Brave + AMP. Brave’s mobile browser will bypass Google’s Accelerated Mobile Pages (AMP). In a new feature called De-AMP, users will now be taken directly to the original website in an attempt to improve privacy, security, and internet experience. In what was originally intended to boost performance of websites not optimized for mobile, Google is now finding criticism — and lawsuits — from publishers claiming that AMP does more harm than good. As a mobile user myself, I’ll add that it can also be disorienting when encountered unexpectedly (“Wait, I’m not actually on the site?”).

Mobile Stats. Smartphone shipments down 11% worldwide according to Canalys report. As you can probably imagine, the decline in sales can be attributed to the invasion of Ukraine by Russia, COVID variants, and inflation concerns. Interestingly, Samsung and Apple both gained market share over the remaining OEMs in the top five. Even more interesting is the story that the growth in second-hand phones tells. And then there’s mobile app trends.

This week, I wanted to talk a bit about the future of tablets — my current area of focus, professionally. Thanks to the multitude of tech emails I subscribe to, I ran across this podcast (a la Twitter Spaces) from Mark Gurman and Federico Viticci, two well-known SMEs on Apple and mobile. They hit on some points about pro-level usage of the iPad that I was repeatedly nodding my head with as I listened (which were also outlined in the past week’s Power On email).

I’m currently in a position where my personal MacBook Pro and iPad are both aging and need some serious updating. And as I find myself needing my MBP less and less (save for the occasional personal project), I’ve been leaning heavily towards a new iPad Pro. Except — which Gurman and Viticci both point out — despite its name, I can’t really do pro-level work on the iPad Pro. Or at least what I would consider to be pro-level work (which is what obligates me to macOS). It feels like the hardware — the processing power, the resolution, the peripherals — is there. The disconnect is on the software level. Which illustrates a bigger issue with tablets in general, for both Android and iPadOS.

As Microsoft, Samsung, and Google continue to invest in tablets and their hybrid use cases, I see Apple lagging behind (see also: Foldables). Which is odd, given that, historically, they are the ones who have led the way. Maybe, just maybe, we’ll get some exciting news in this year’s WWDC and I, along with many other hopefuls, can finally ditch my MBP and commit to an iPad Pro setup for more than media consumption and doodling.