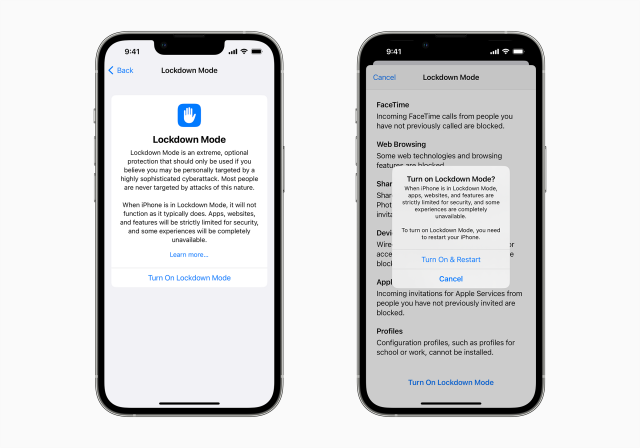 Apple Watch… Series 8 could warn you when you’re coming down with a fever. A feature that’s been rumored since last year, trusted Apple reporter Mark Gurman reports that it will not provide an exact reading. The body temperature sensor is expected to be released in the standard model — noting that higher end models are expected to also be announced. We’ll see how all this shakes out in September.

Lockdown Mode. Apple is developing a new feature to fight industrial-strength hacking. When activated, Lockdown Mode will offer protections like blocking attachments, link previews, incoming FaceTime calls from unknown numbers. Strengthening the company’s stance on privacy and security, Apple also plans to continue augmenting this feature in subsequent updates. And if an Android zine is also reporting on it, you know it’s big. Check out the podcast version.

ROG 6. ASUS launched its next gen gaming phone, the ROG Phone 6. With specs like a 165Hz OLED display, 2-day battery life, and Android 12 out of the box, it’s hard to ignore — even if it’s not immediately available in the US (and carrier support may be limited). Although I’m not a gamer myself, I’m very intrigued by the notion of a “gaming” phone (mobile gaming is projected at $22.83B for 2022) and other uses this sort of niche handset could lend itself to. Check out this video review.

Xiaomi 12S… Series was announced featuring a Leica camera array. The Leica partnership aligns with the 2021 trend of 70% of time spent in mobile was photo and video apps (along with social). Aside from the camera, it will also ship with Android 12-based MIUI 13 and fast charging capabilities. Again, we will not immediately see the 12S series here in the States, but Xiaomi is not without its marketshare and is doing some interesting stuff — especially the Ultra model.

Musk v Twitter. Not surprisingly, Elon Musk wants to back out of his deal with Twitter. For those who’ve been following along at home, it was pretty obvious from almost the beginning that he didn’t really want to buy the social media platform. However, there are those pesky little details of a binding contract that won’t let him off so easily (Twitter has already filed suit). Not exactly something I want to include in my newsletter, but given the mobile-first nature of Twitter, it feels kinda obligatory.

I’m still not completely caught up, so this won’t be the deep dive that I sometimes do here. But I did find this article on Apple Maps vs Google Maps that, as a user of both, resonated with me quite a bit. Beyond doing side-by-side screen comparisons (which I personally love), the author discusses the importance of contextualizing data and data accuracy — especially for a navigation app. For me though, the main takeaway was to always consider the impact of low frequency events.

Oftentimes, with projects that I work on, when we get to spinning our wheels over solving a particular problem, we use the likelihood of its occurrence to determine how much time and effort we should spend on the solution. However, we seldom call into question the potential impact to the end user when it does occur — from minor inconvenience to total deterioration of the experience. This is something to be more cognizant of moving forward.