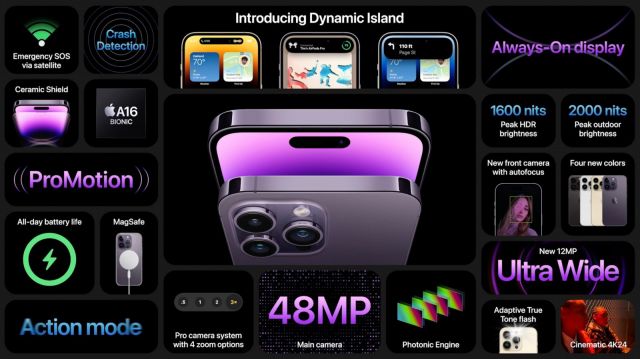 Apple Event Recap. Here is everything that was announced at the Apple Event last Wednesday. AirPods Pro 2, Apple Watch 8, Apple Watch Ultra, and of course, the iPhone 14 were the main products announced. But it was the Dynamic Island on the iPhone 14 Pro that was the star of the show, embracing the evolution of the contentious notch design to a pill-shape cutout wrapped in software enhancements. Pre-orders for the new iPhone were on Friday. You can catch the replay here.

iPhone vs Android. For the first time every, there are more iPhones in the US than any other smartphone. On the heels of the iPhone 14 launch, analytics firm Counterpoint Research reports iOS overtook Android as the primary mobile OS. It bears repeating that this specifically for the US market and that Android is still #1 globally. As demand increases for foldables and Apple continues to hold out, we’ll see how long they can hold onto the lead.

Pixel 7 Event. Not to be outdone, Google announced the official launch event for the Pixel 7. Teased earlier this year at Google I/O, we knew the announcement was coming, but now we have an official date and time (Oct 6 @ 9am CDT). Hopefully, we’ll also get announcements for the Pixel Watch and Pixel Tablet (and maybe — just maybe — a Pixel Fold).

SDC22. Keeping up with the Joneses, Samsung also announced their 2022 Developer Conference. Being held both in-person and virtually, the annual event will highlight the company’s plans for the SmartThings platform, focusing heavily on the connected experience. The event, in standard format, will kick off with a keynote followed by breakout sessions. If interested, you can sign up here.

Honor Global. Honor revealed plans to take their flagship phones global. Filed under news that got lost in the shuffle, the China-based company made the announcement during their keynote at IFA Berlin (which happened over the previous weekend). This is exciting because of the acclaim that their foldable, the Honor Magic V, has received and Samsung could use the competition.

I gave a talk this week for our internal Mobile Community of Practice, the prep for which took up most of the time I would normal spend cobbling together this dispatch. What was the talk about? I’m glad you asked! It was about Tables on Mobile, a particularly tricky topic. In fact, I’d say out of all the problems we have to address on mobile (especially coming from desktop), tables is the second most complicated (the first being navigation).

In the talk, I covered basic responsive tables with progressive enhancements, native-style tables for iOS and Android, and advanced tables heavily influenced by a mobile first approach. Is there a panacea for mobile tables? No, there is not — every situation is different, requiring a different solution. But I tried my best to outline the considerations to assist with choosing the best pattern. No recording available (since this was an internal preso), but here are the slides.