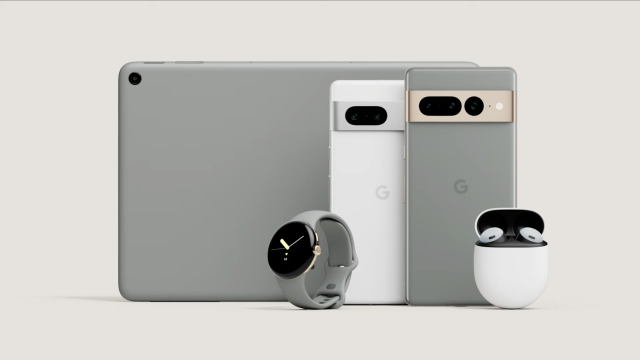 Pixel Recap. Here is everything that was announced at the Google Pixel event. The Pixel 7 & Pixel 7 Pro, Pixel Watch, and Pixel Tablet — all of which were previewed earlier this year at Google I/O — were officially announced. In addition, the Home app is being revamped and guidelines for building Wear OS apps were published as Google embraces a product ecosystem focus. You can watch the replay of the almost 1.5hr event here.

Google Widgets. In more Google news, Widgets for the iOS 16 Lock Screen also began rolling out. Gmail, Google News, Drive, and Chrome are the first to arrive. However, Maps and Search are still in the works with no official word on a release date. It seems like there’s an opportunity to bring Material You style widgets to your iPhone, although I won’t hold my breath. I just hope Microsoft follows suit so I can see Outlook on my Lock Screen when Work Focus is on (mirroring my Apple Watch).

Apple Watch Ultra. Bloomberg’s Mark Gurman reviewed Apple’s new extreme-sports Watch. In it, he covers the upgraded battery, display quality, and rugged design, features that would appeal to regular folks — not just hardcore athletes. He goes into particular detail on the Action Button, including recommendations on how Apple might expand on its functionality. Given that I will likely never own one myself, it’s fun to daydream about a scenario where one magically appears on my wrist.

Matter 1.0. The interoperability standard from the Connectivity Standards Alliance finally arrives. In collaboration with Apple, Google, Amazon, and others, the new standard that seeks to unify smart home devices is now open for certification. Want I’m interested in is backwards compatibility for devices already in use because, let’s face it, who wants to replace all their smart home devices with Matter certified ones? Read the press release here.

Foldables. IDC forecast worldwide shipments to hit 41.5M in 2026. That’s triple the number predicted for 2022 — 13.5M units. Unsurprisingly, price is a pain point for would-be customers, which could be offset by 2-in-1 use cases for the business user. But if you’re considering support for foldables in your product, we’re still a ways off from them being mainstream (doublecheck with your analytics, of course).

Picking up where I left off above on the Pixel Event, I wanted to dwell a bit more on the Pixel Tablet. This is something I’ve wanted Google to pursue for awhile now. I never understood why the original Pixel Slate ran Chrome OS when the seemingly obvious thing to do — especially when competing against the iPad — was to run Android. Just like they used the Nexus line, the Pixel’s predecessor, to show other OEMs how Android was intended on the phone, they should’ve been doing the same for tablet well before Android 12L. But we’re here now, at least.

Aside from flaunting prime examples of 12L screen design, what caught my attention the most was the emphasis on tablets being more of a home device. The use case that they painted made for a strong argument for pairing the Pixel Tablet with a charging speaker where you can dock it for hands free use. I own three Nest Hubs myself and not allowing the display to detach as a tablet has always felt like a missed opportunity to me. I’m glad to see that Google finally came around to recognizing it as well and I look forward to placing my order for both devices (tablet + base) when they become available in 2023.